This is what I delivered yesterday at a corporate offsite in beautiful Calistoga, California. It was a one-day session; the ask from the client was to get the team to think big and consider their business from a clean sheet. My bias is to do that while leaving them with practices that allow them to do this continually after I've left. The title comes from here. 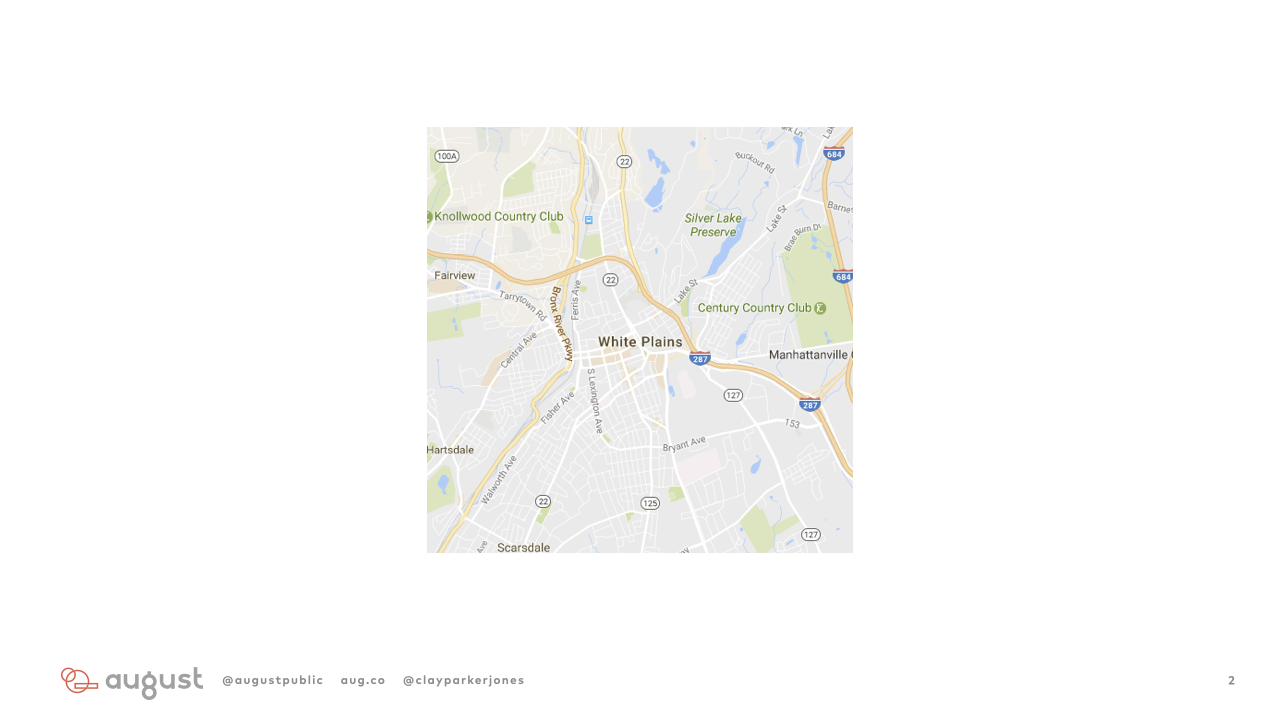 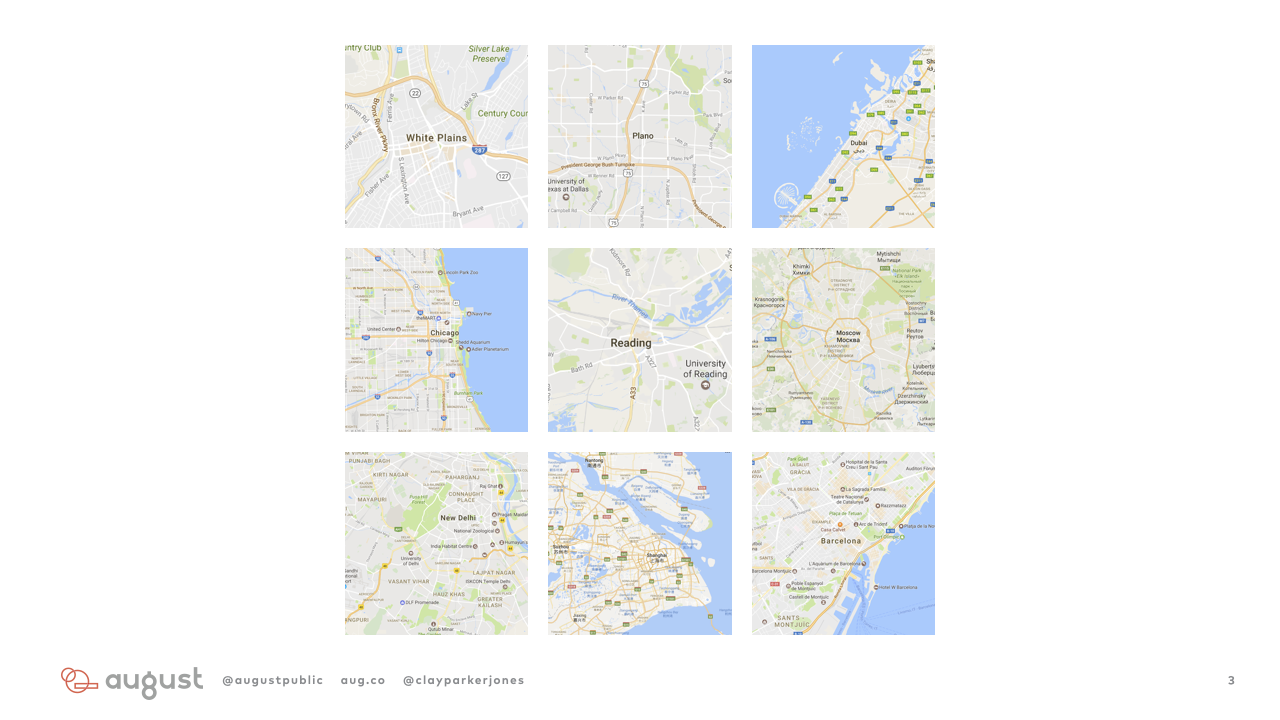 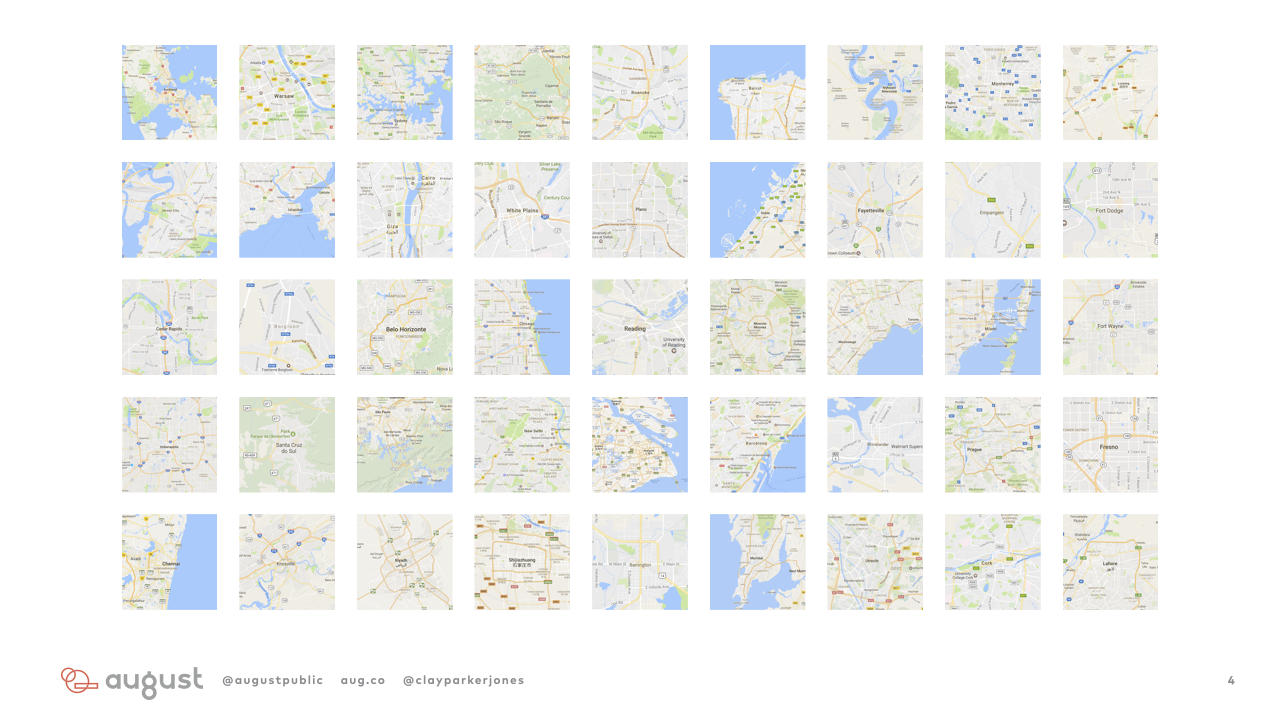 I started with a quick case-study of our current work. It began with a pilot in a single site, immediately after a re-org, where we coached teams toward new ways of working and organizing. Knowing that it worked, but that it was hard to execute on one's own, we spent the next 18 months (up until now!) making things simple and spreadable. The practices are now in more than 60 cities, with thousands of people working in a new way. 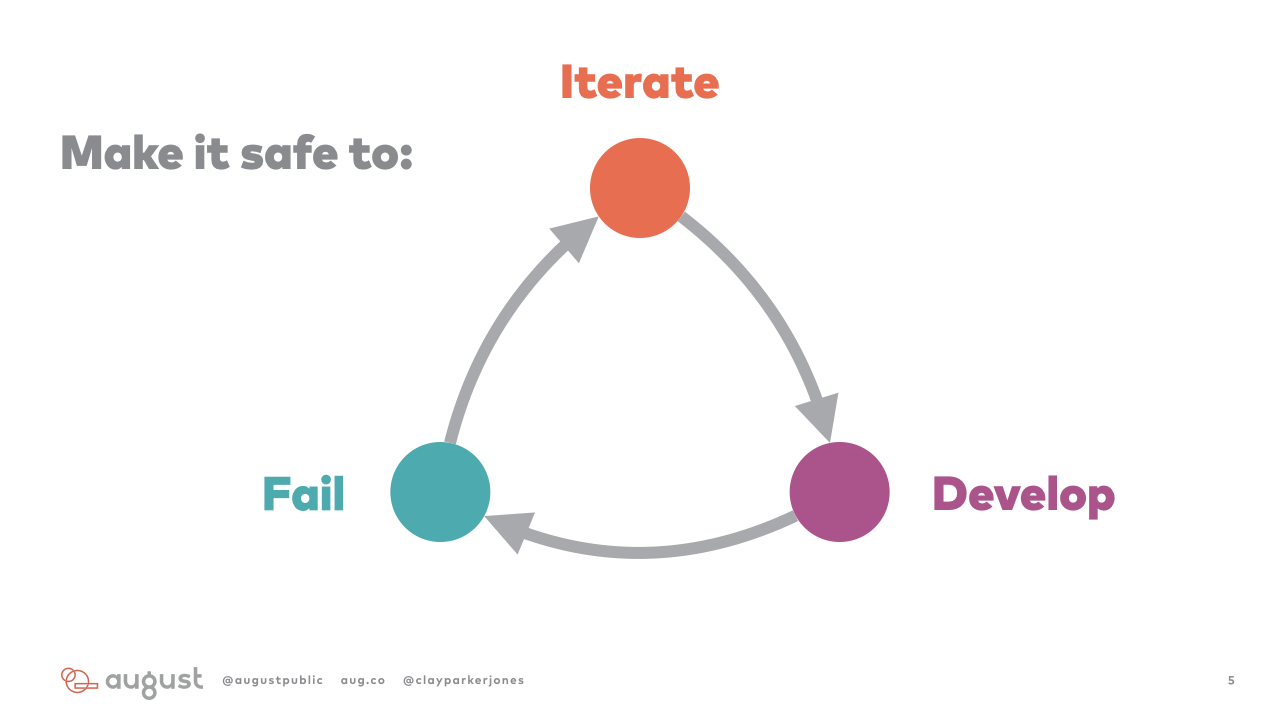 As we roll out a tailored-to-suit suite of small practices across all of our clients, we survey adopters of the practices pre- and post-adoption. We're noticing some patterns. While it's still early days, the factors that lie beneath the change – the reason why teams are able to accelerate their pace 15-30x while improving engagement – are falling into three categories:

My hypothesis is that these are sequential and self-reinforcing, but, we'll see!

This day is structured according to that loop, and we spend two hours on each. 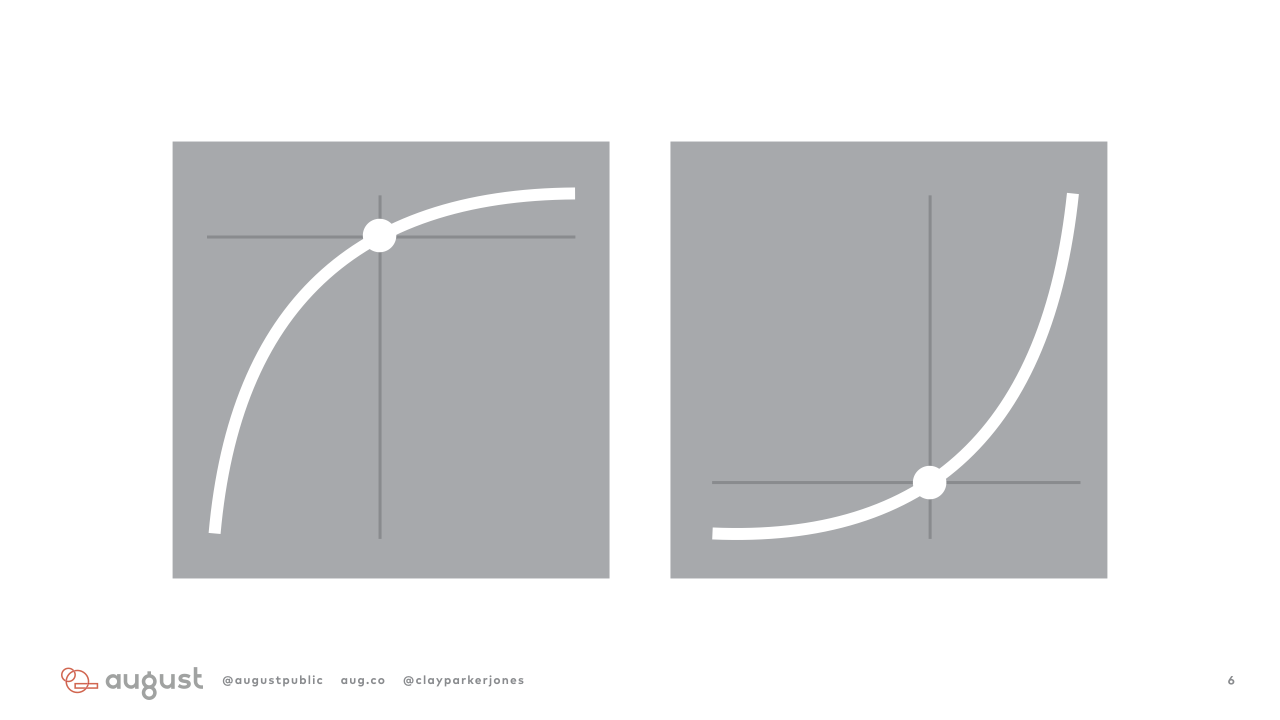 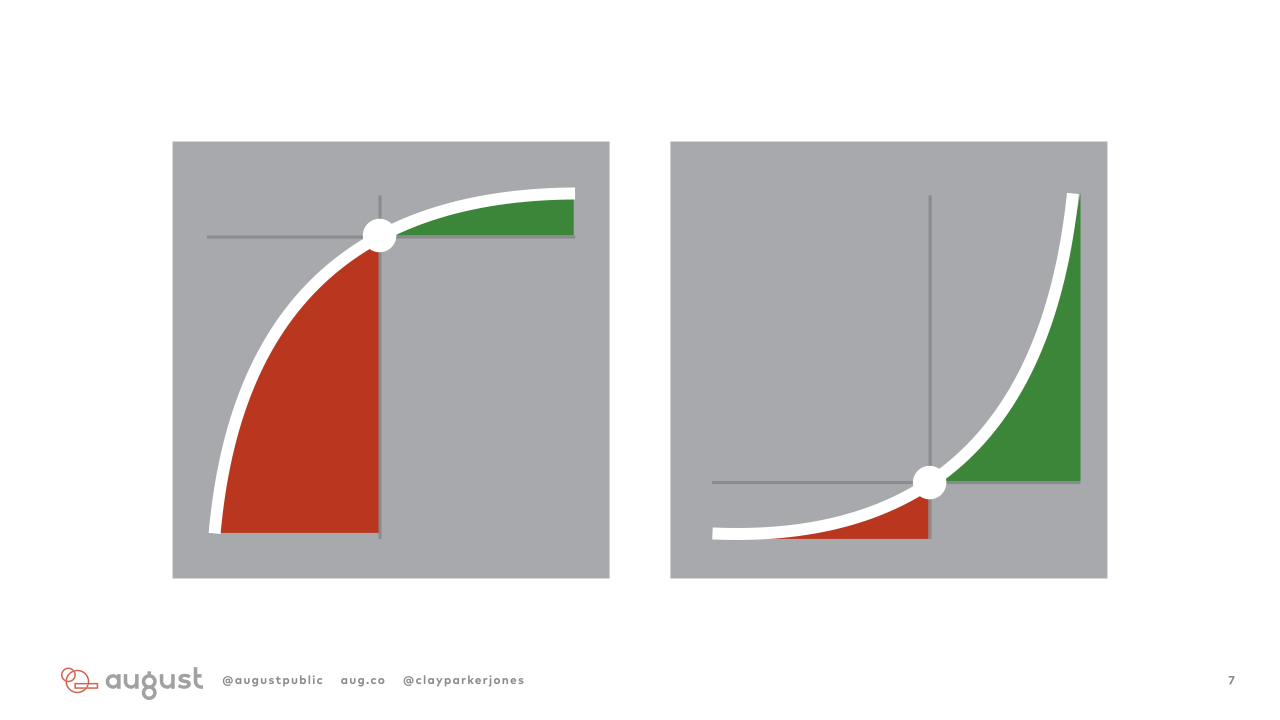 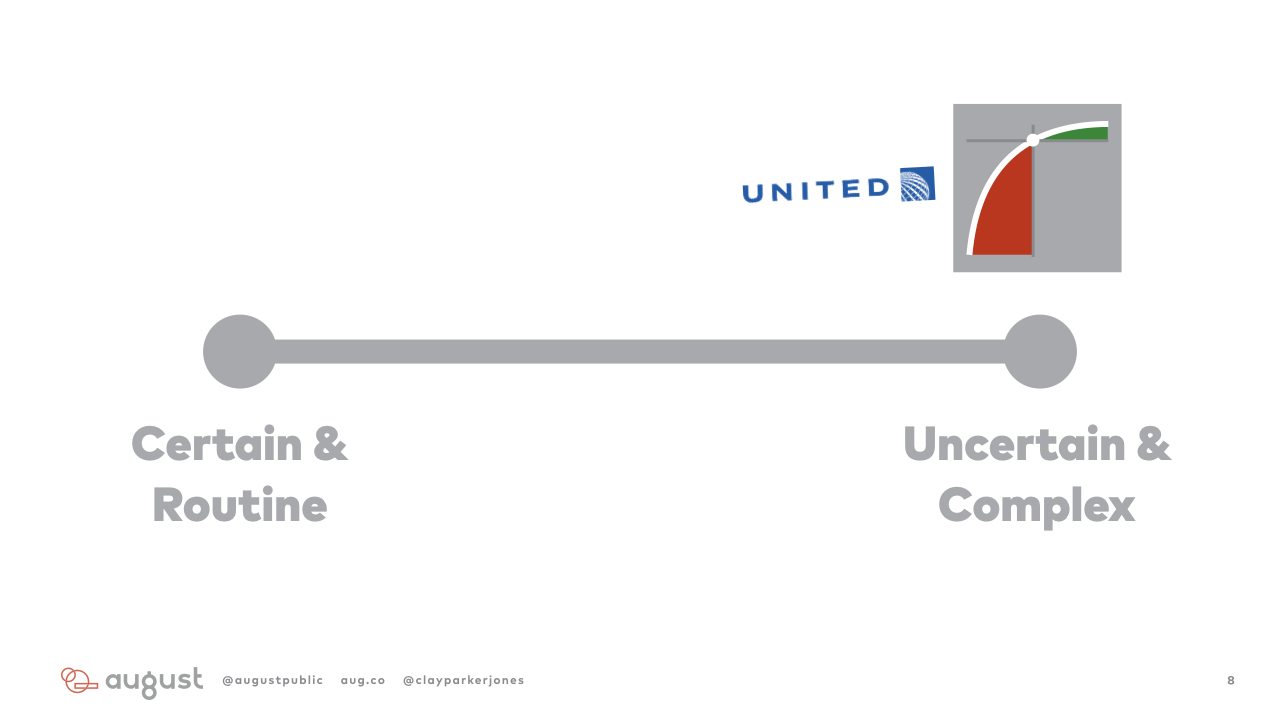 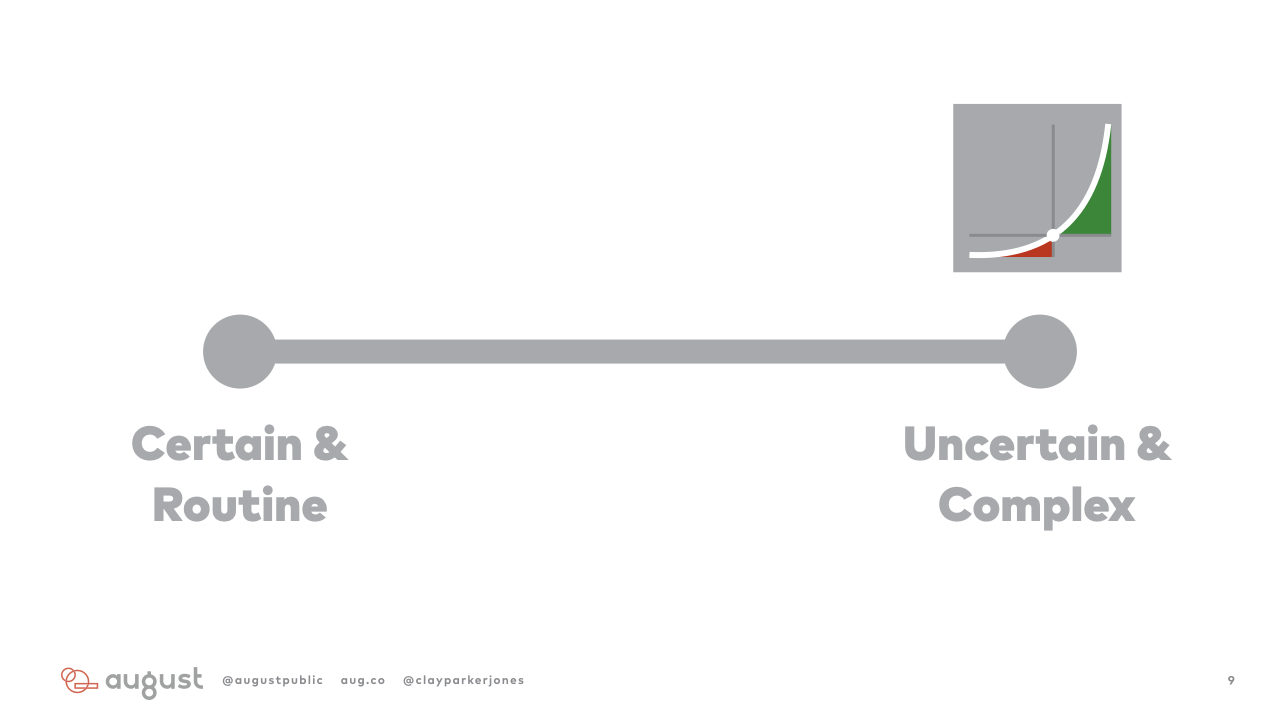 Before we get into that, though, there's a central tension in this work that is worth talking about: small experiments with radical intent.

Remember throughout the day that: 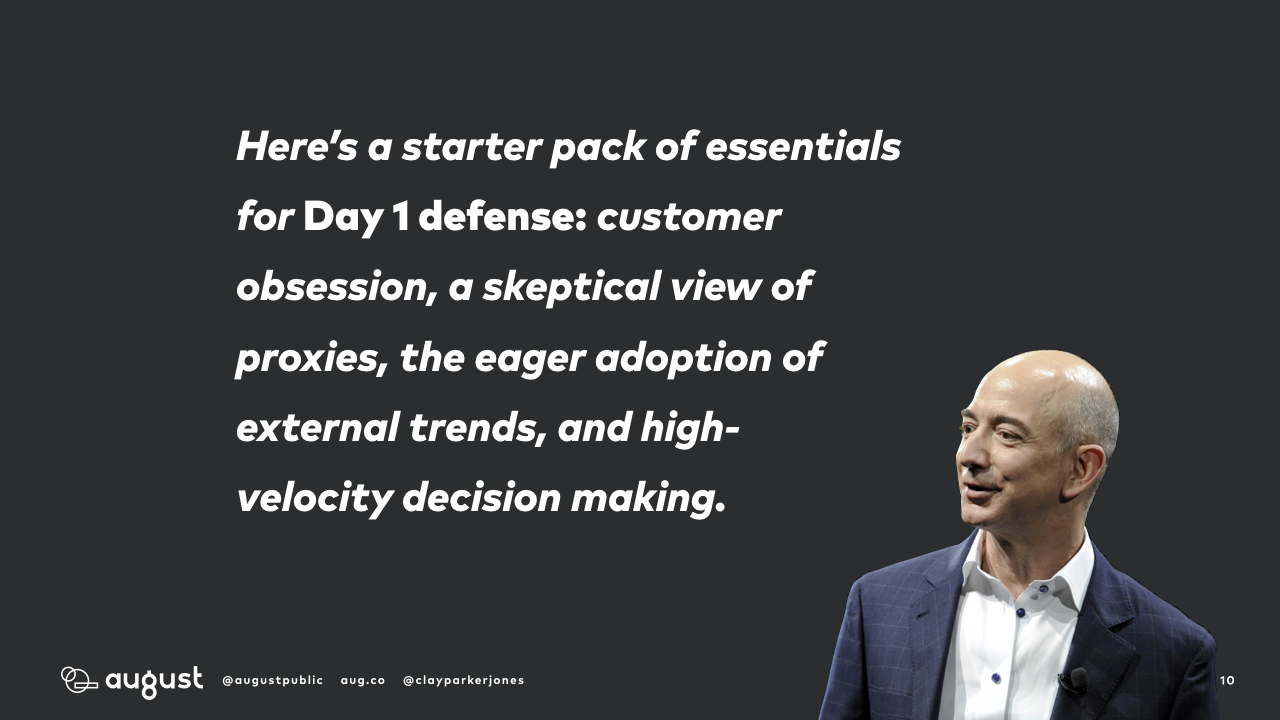 A quick discussion of Bezos' most recent letter, but you may as well just go read it. 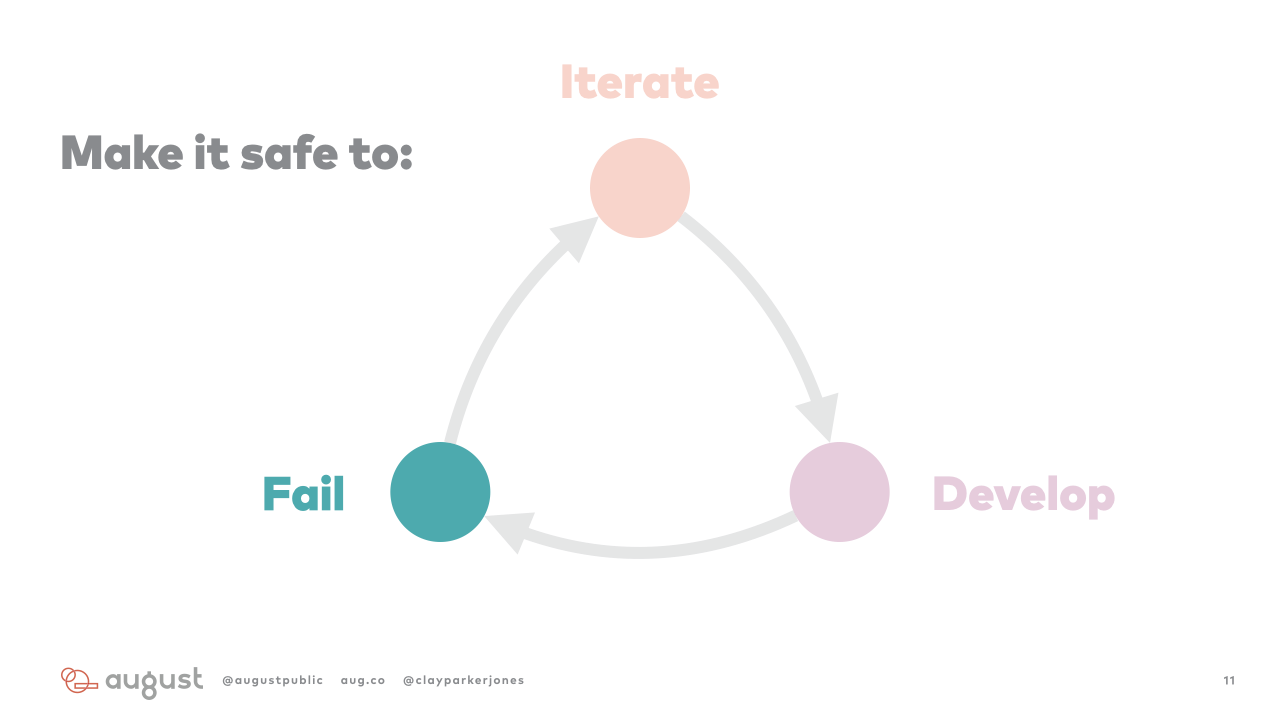 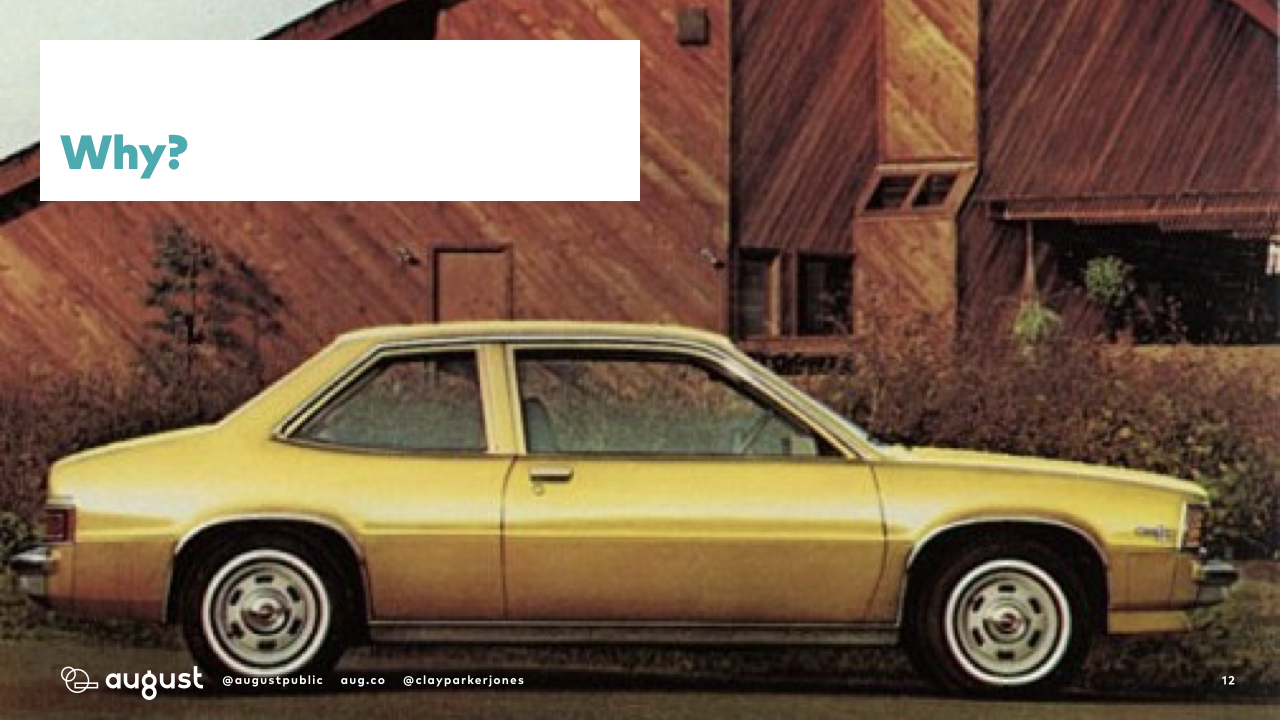 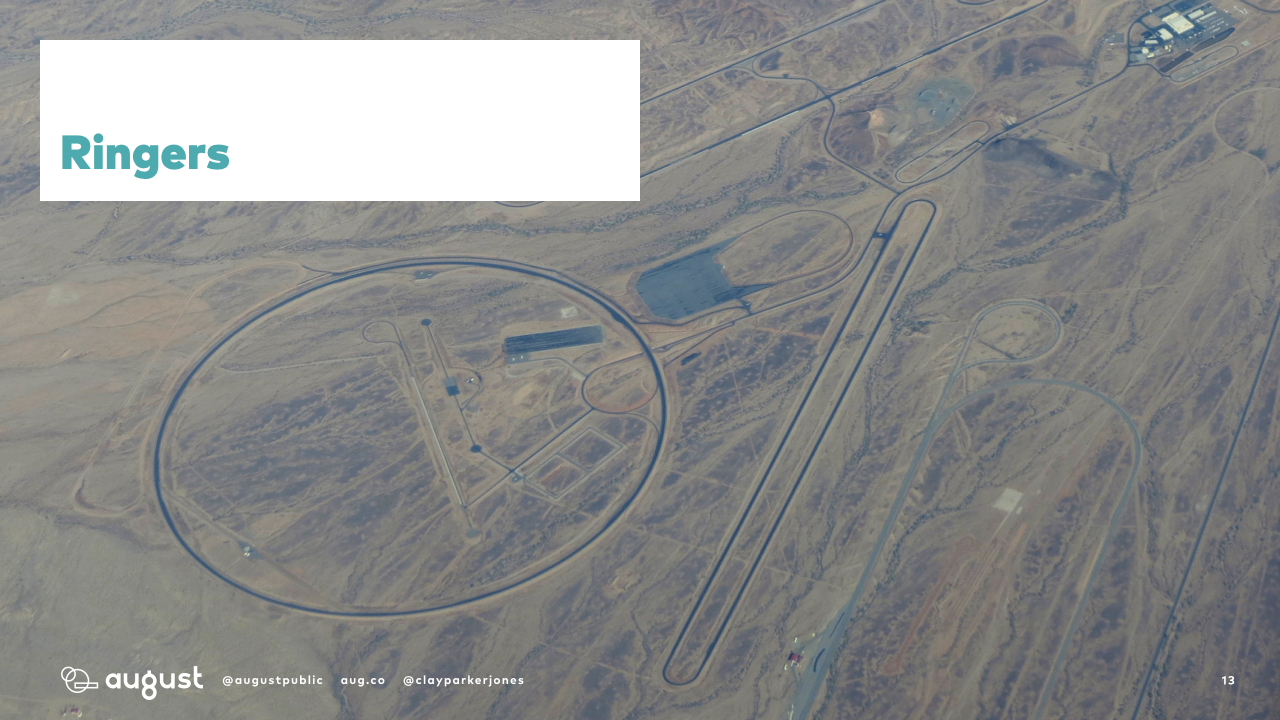 A quick story of Corporate Misfortune kicks off each section. For "safe to fail" I offer one of my favorites, about why GM's cars were so bad (are so bad?).

GM has a special test track in Arizona where execs are periodically flown to test new product. The engineers at the test track doctor the cars (hence "Ringers") for the execs. As a result, the execs are driving better cars than the public buys. The execs don't know about quality problems, and sign off on the new product. 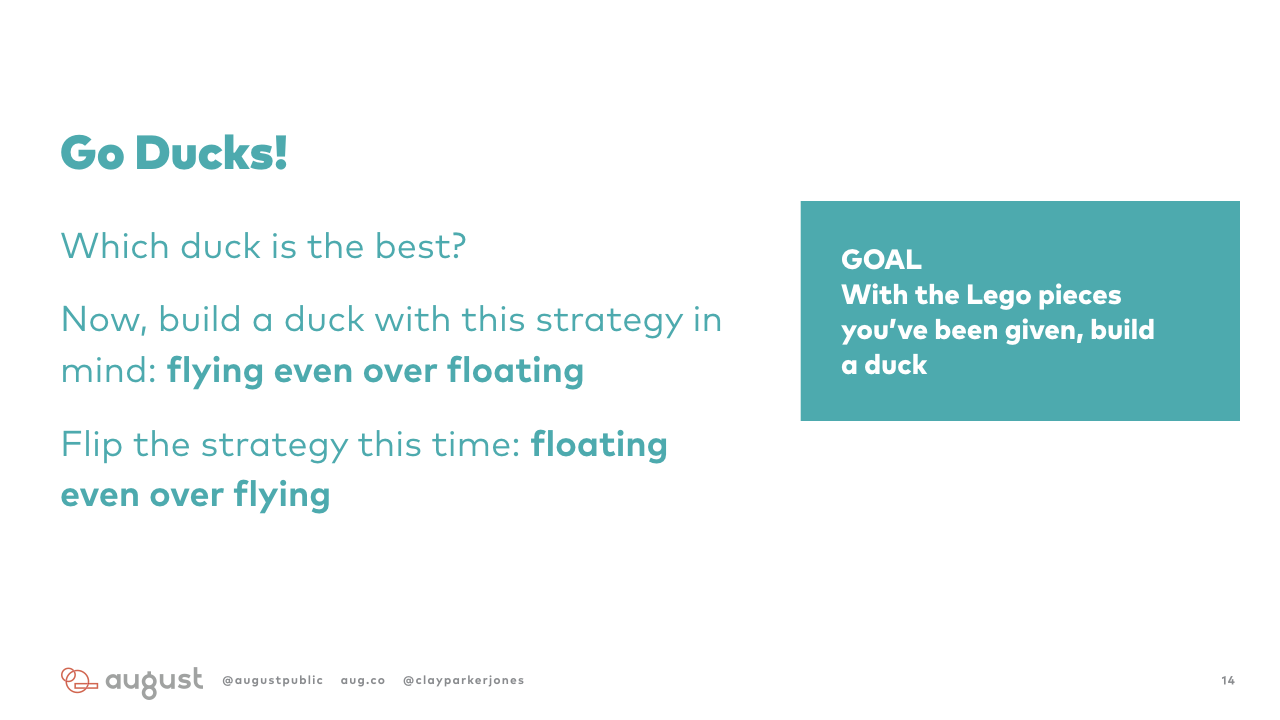 Game time! This one is pretty self-explanatory. The neat thing is that all the designs end up looking the same. Thanks to Monique for this one! 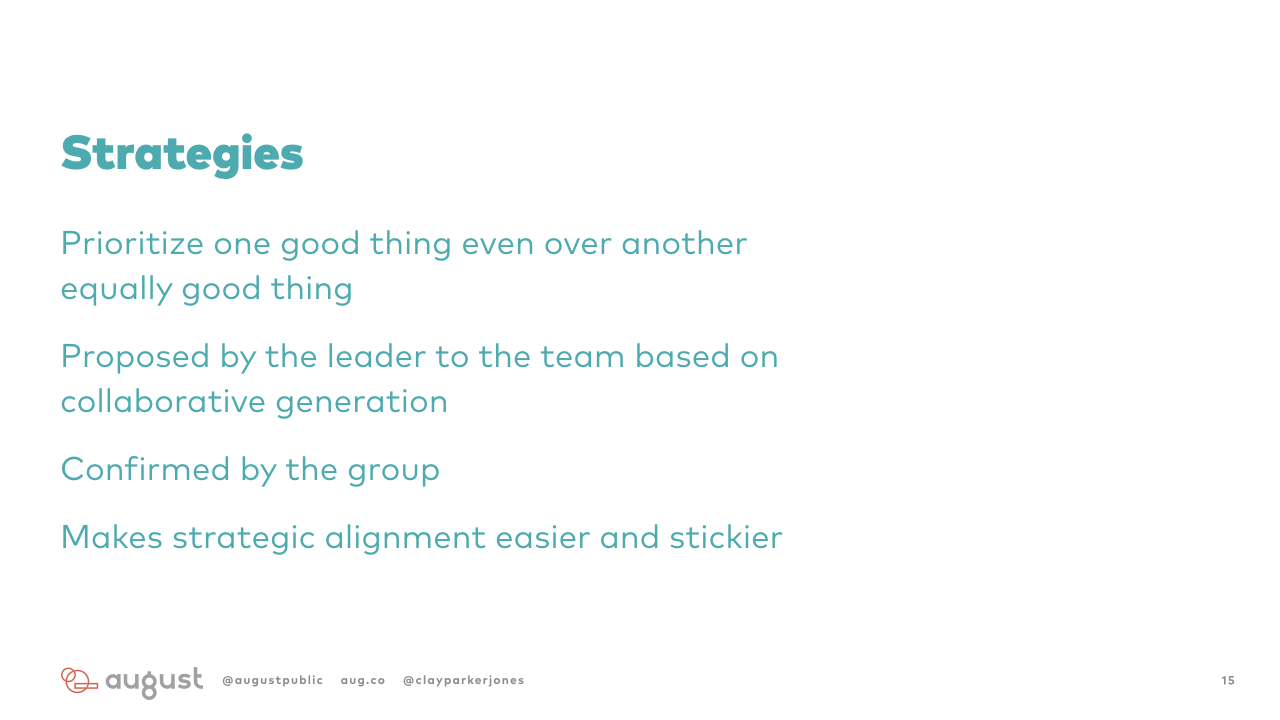 Then: a modified retrospective to generate Strategies.

Prompts (each with a two-minute silent writing moment):

We then shared out in three rounds, and took five minutes to generate one or two strategies per person, which we read aloud, and voted on. The team leader proposed three to the team. The team confirmed that they wouldn't block the strategies, and then each person generated one change that they would make based on the strategies. 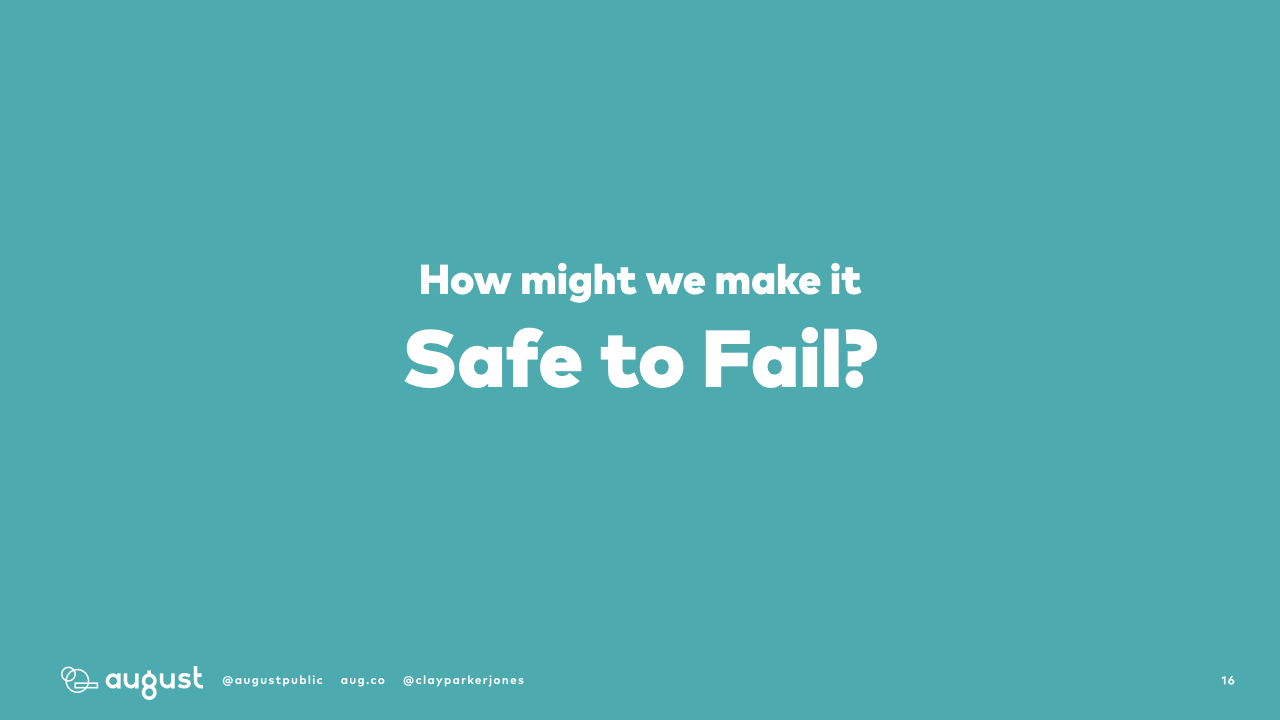 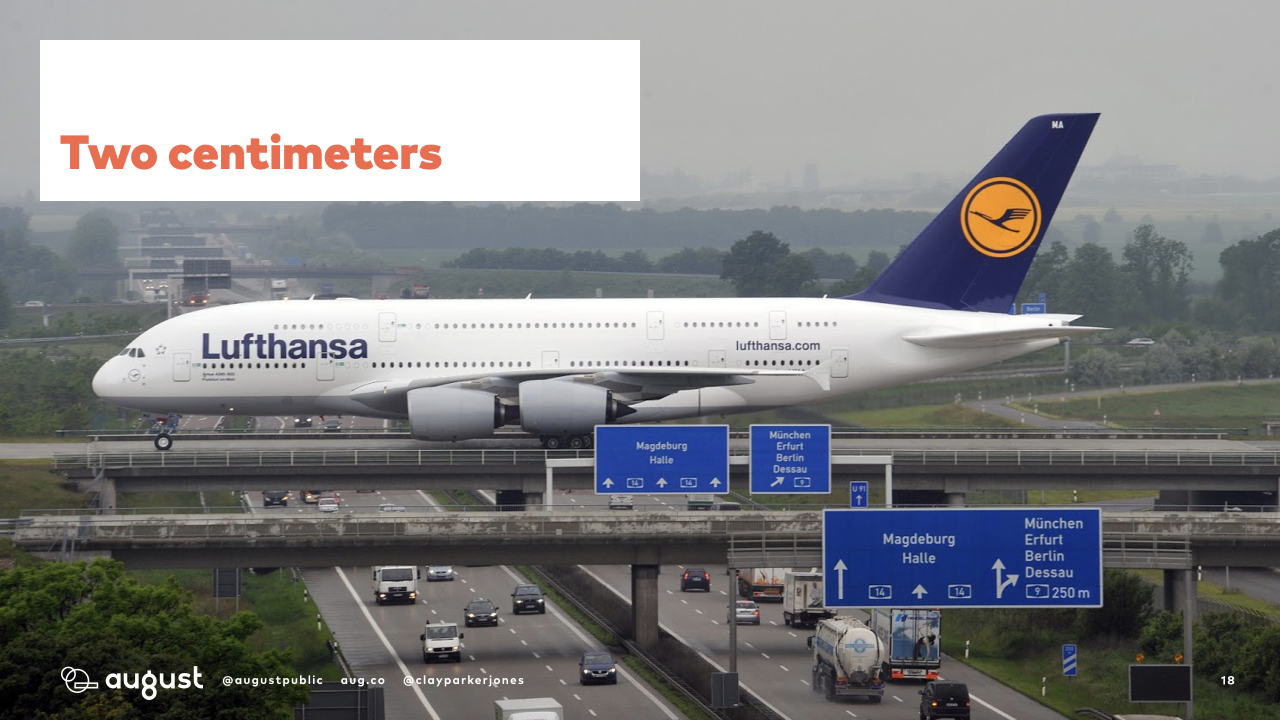 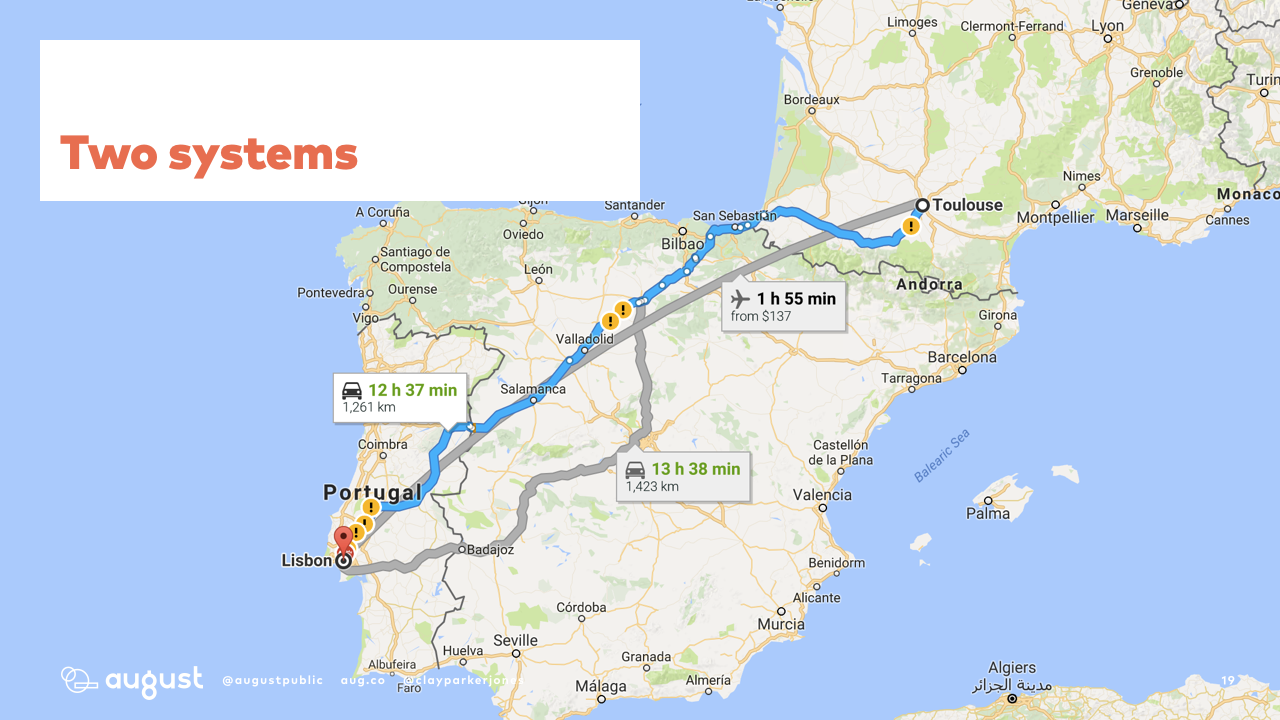 The Airbus A380 is the biggest passenger jet in the world, and it was a monumental engineering and logistics challenge to complete. When the folks building the fuselage went to install the wiring (designed elsewhere), they found that across 500+ kilometers of wire contained in the plane, they were two centimeters short (0.000004% off).

Because the two teams designing the fuselage and the wiring were using two different versions of the same CAD software. 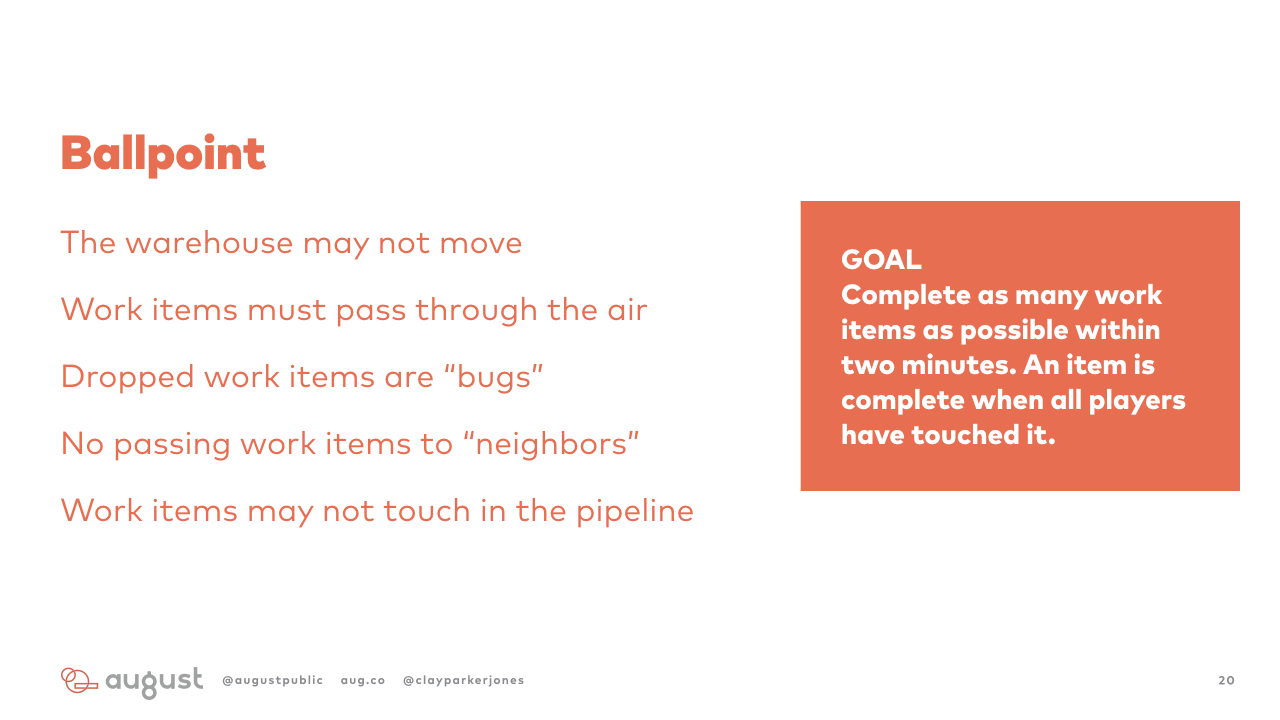 Gametime! We play this one a lot at August. No spoilers on the solution, but it's a good one show people what rapid iteration looks and feels like. 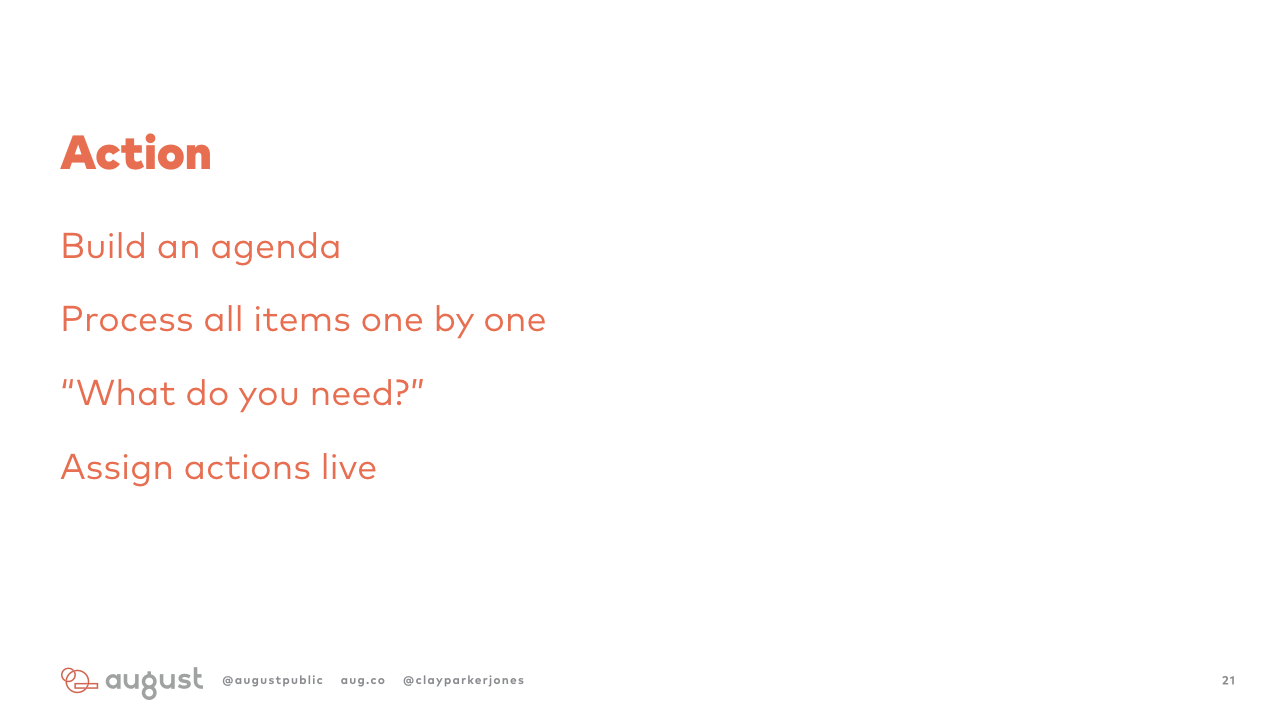 We then made the concept practical by applying the Action process – our radically simplified version of Action or Tactical meetings that you might have tried out there in the world. We built an agenda, using the changes that people wanted to make based on the strategies (from the first section), and then asked each person, "What do you need?" This took some radical ideas and made them super practical. They loved it! 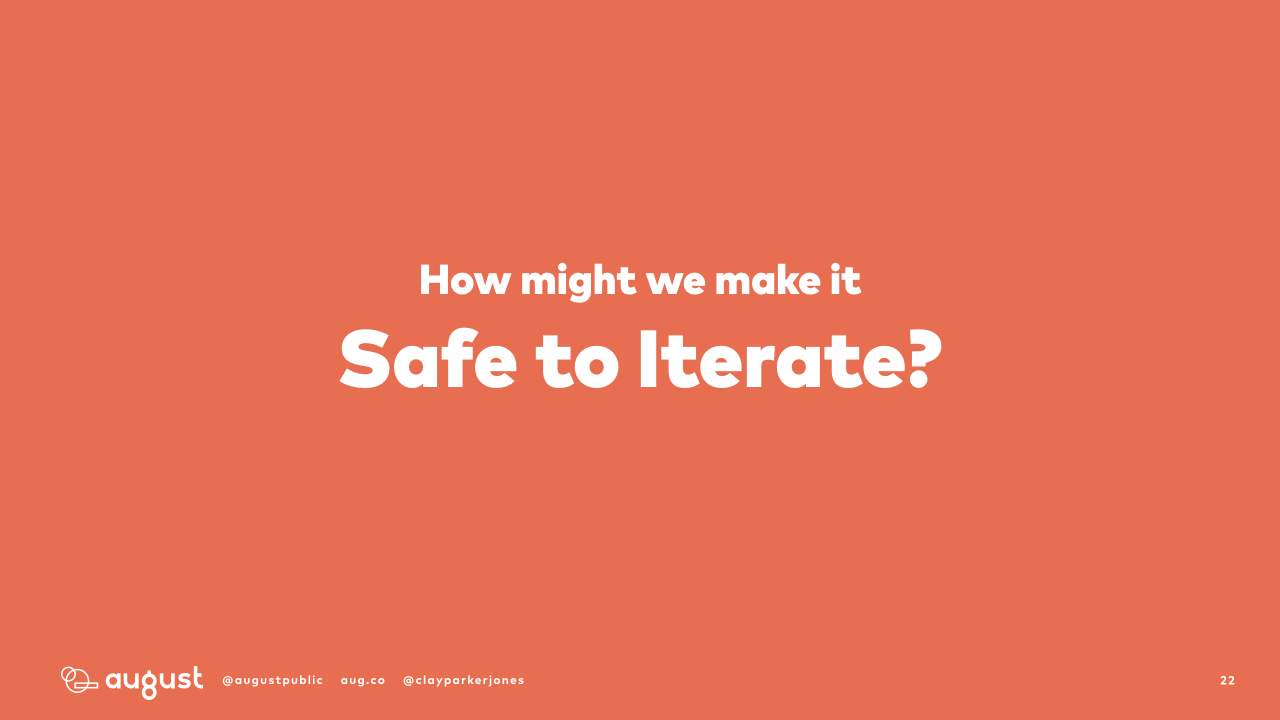 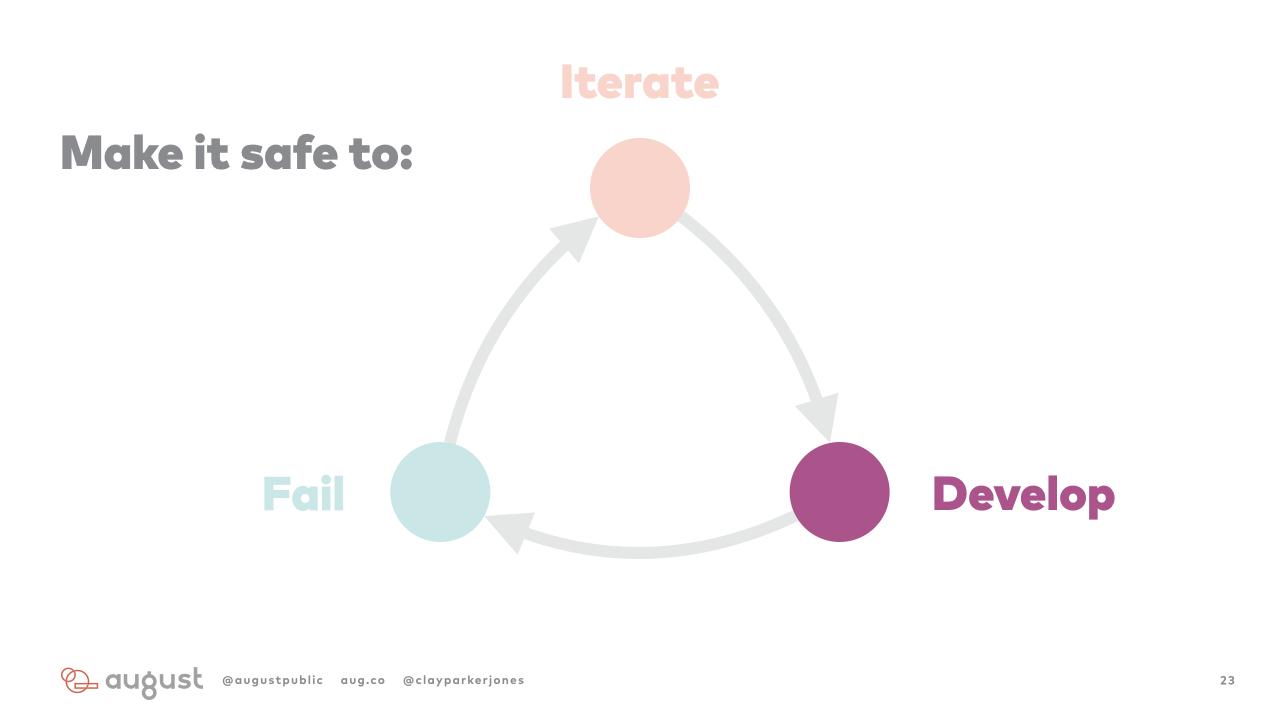 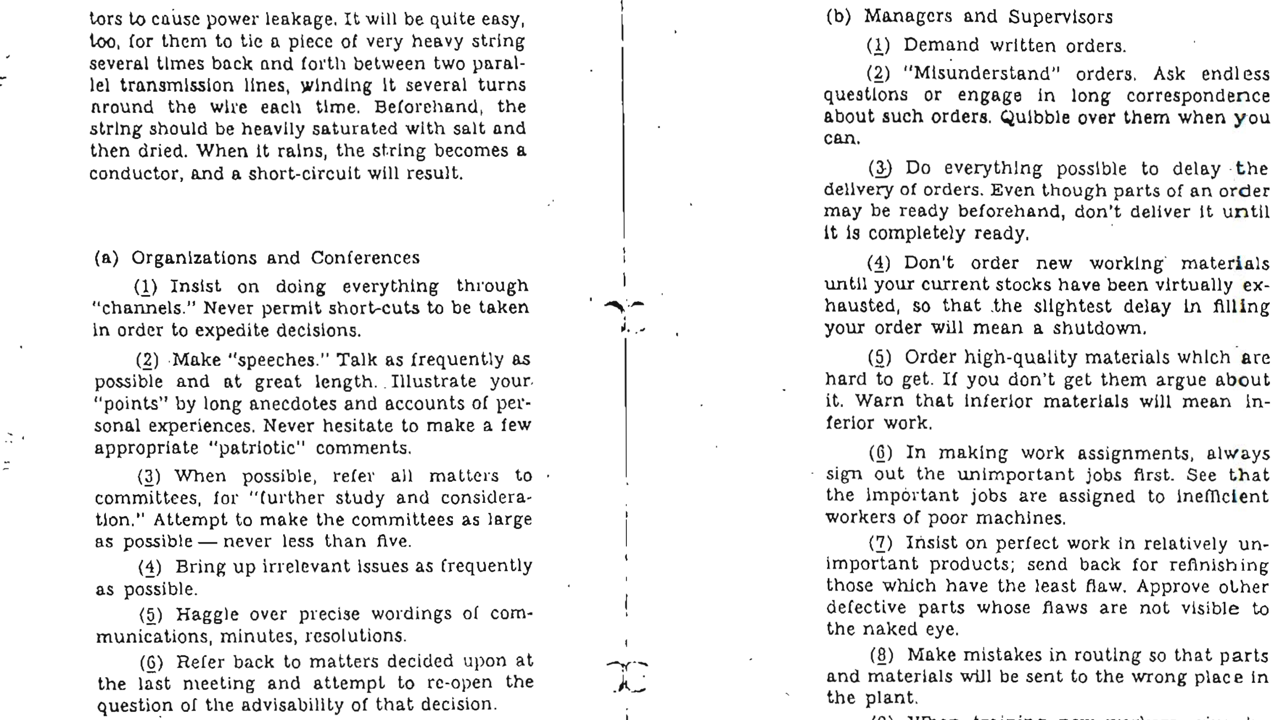 Last storytime for the day. Most folks reading this will probably know what this is, but I presented it in a bit of a different way. I put these slides up and asked, "What is this?"

"It's a set of instructions for work!"

"That one – 'See that three people have to approve everything where one would do.' – is hilarious!" 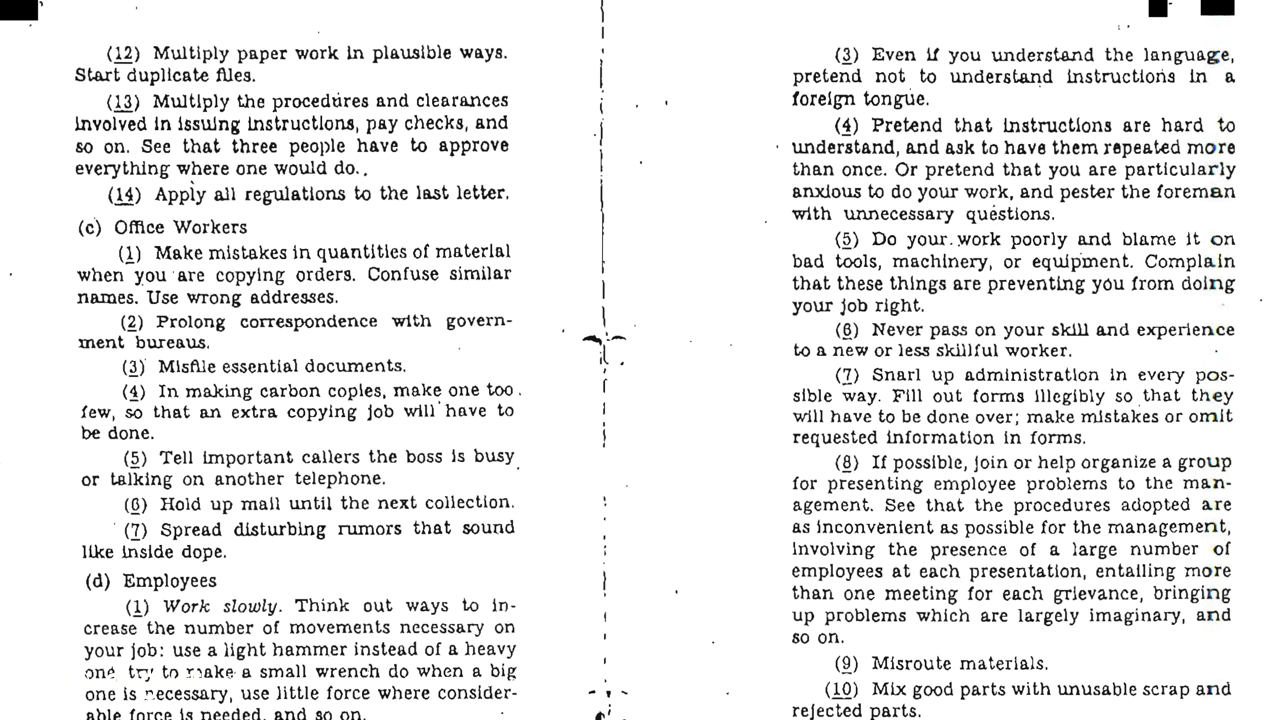 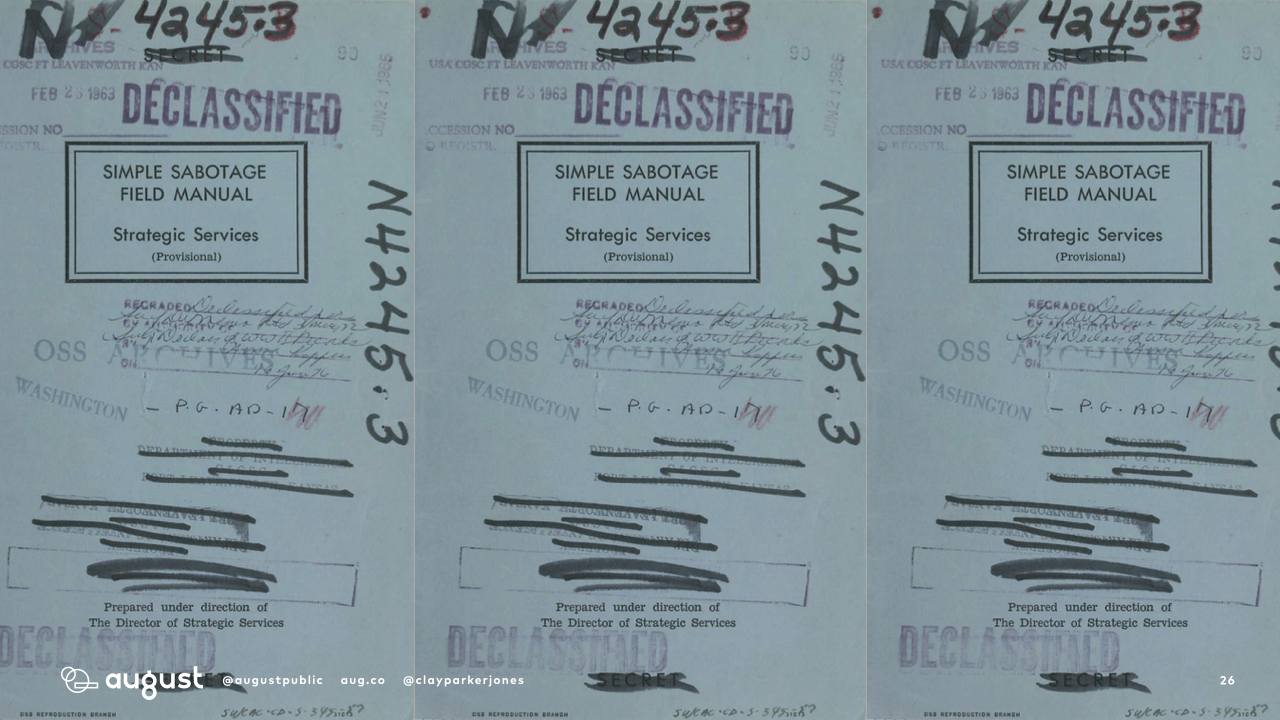 They're from a guide to simple sabotage, helping US collaborators sabotage organizations in "hostile" parts of the world. 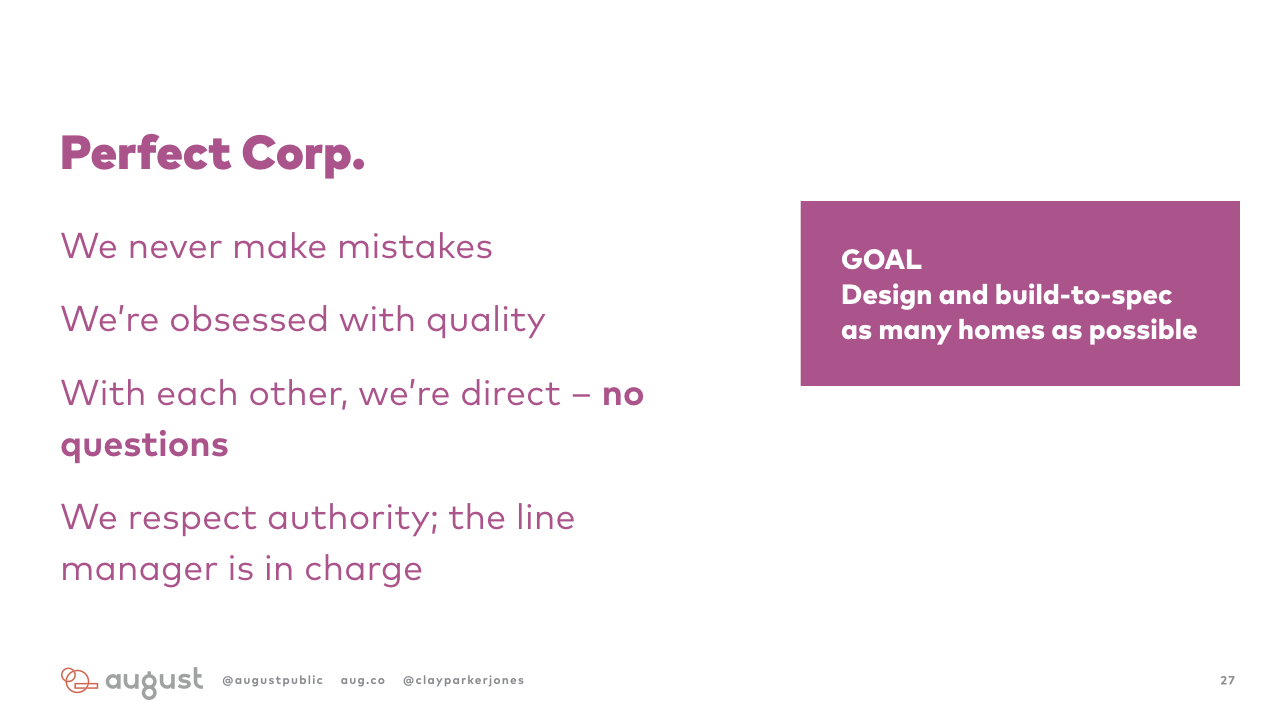 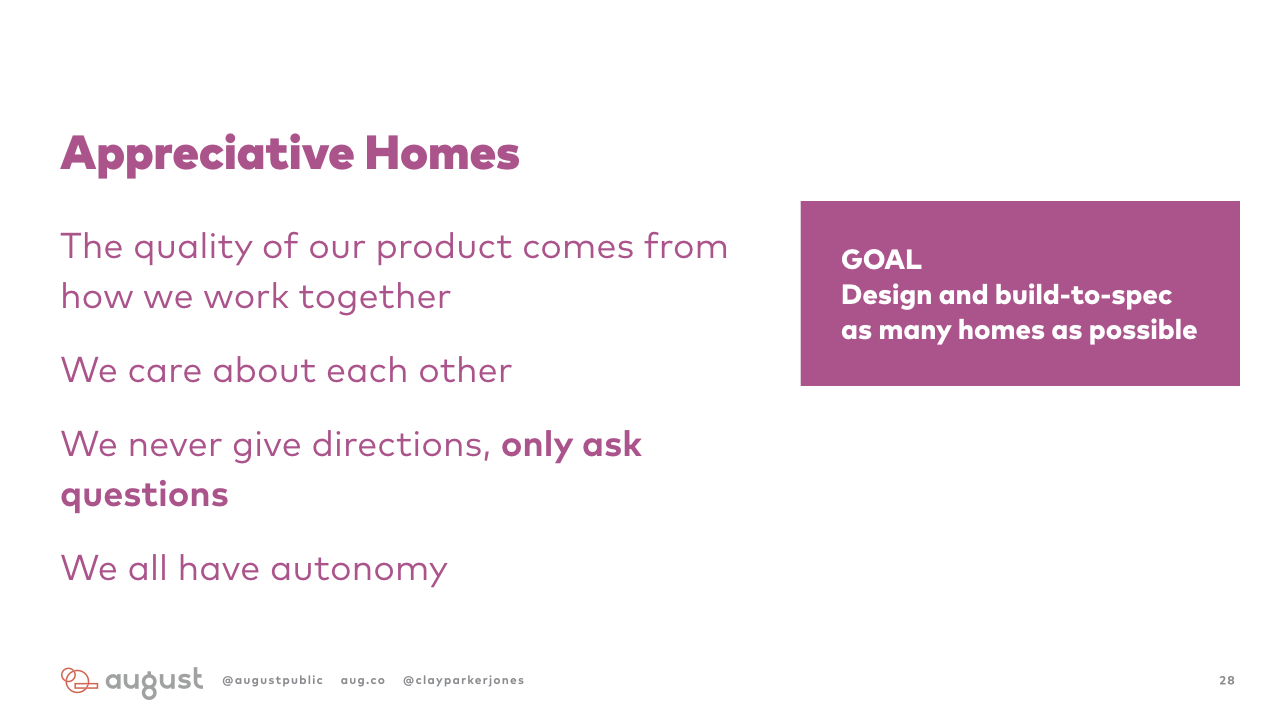 Here's a new game that came to us in a recent Chem Test at August. It's hard to explain here and I'm running out of steam writing up these notes, but it's a really great juxtaposition of two really extreme ways of managing work. It's also suuuuuper fun for folks. 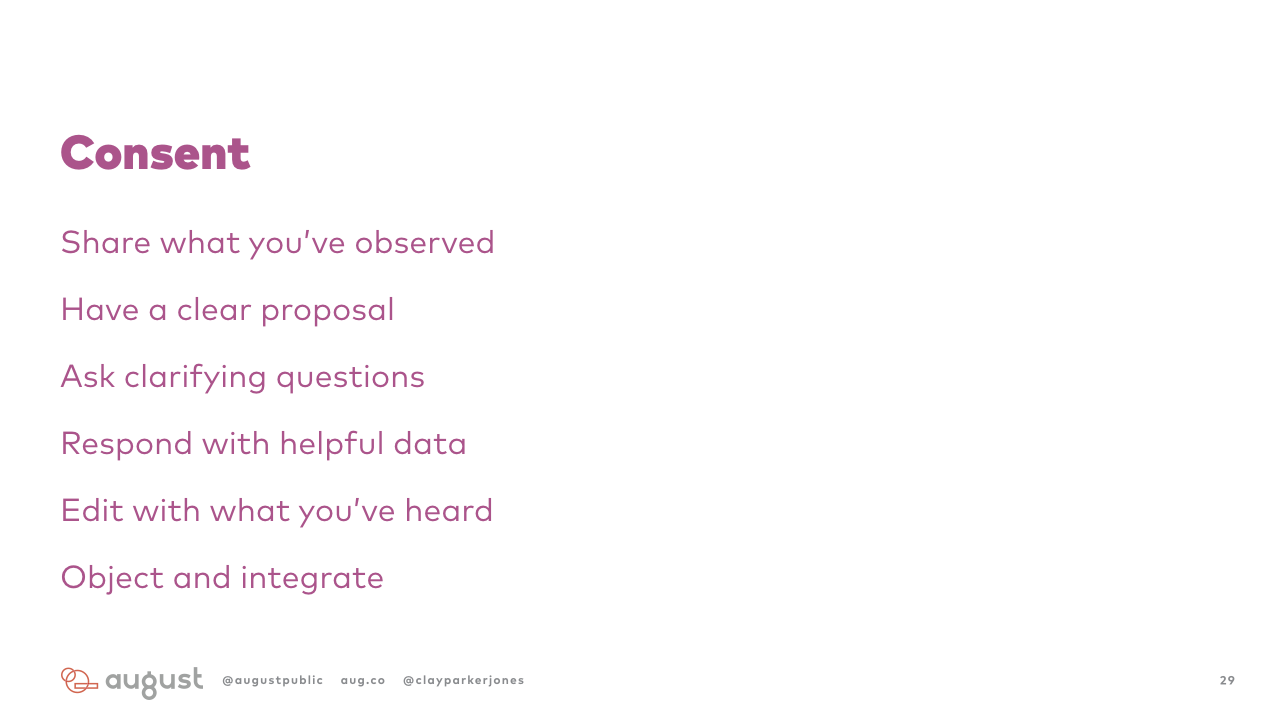 We then went through a Consent process on two proposals, based on the biggest issues we dug up in the Action process. Lots of great learning for the team, with a fair amount of struggle. My main takeaway continues to be that it's essential that teams start with a big, audacious proposal, rather than something that feels safe already. Start small and it'll feel like natural corporate incrementalism, not a small experiment with radical intent. 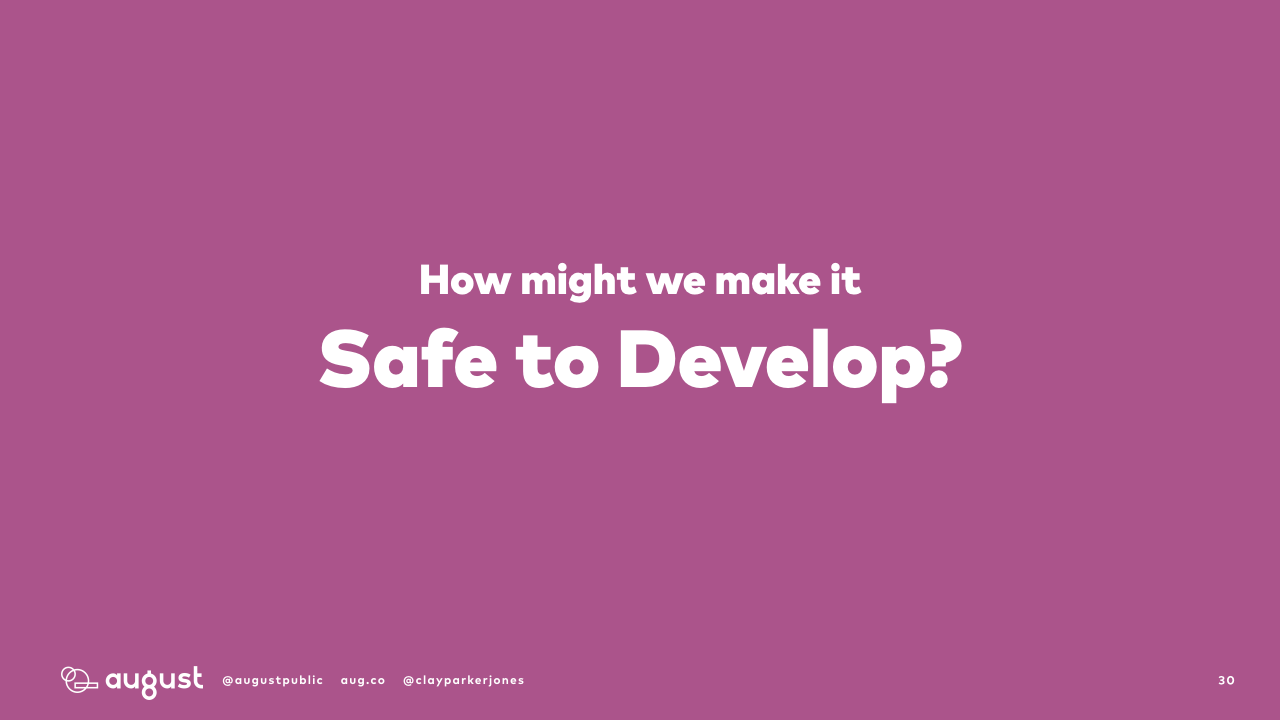 All in all, a great day that the team loved.